The luckiest ones of all…

At Lucky Paws Pet Resort, we are proud to say that our staff is made up of people who love their pets and will care for your pet like their own! Check out our team with their furry family members and friends! 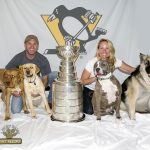 Gretchen and her husband Jason purchased Lucky Paws on January 7, 2014, after cashing out her 401K.  It was a big change for Gretchen as she left the Western PA Humane Society after almost 12 years to take the leap into entrepreneurship.

It has been a labor of love ever since. Gretchen is at Lucky Paws in some capacity almost every day. The staff and dogs are her pride and joy, but the Gardens at Lucky Paws are very near and dear to her heart.

Jason has a job in the computer/tech industry but is thankfully very handy at fixing things that need repaired, as well as shoveling snow and mowing grass. Be sure to say hi if you see him helping keep the facilities in shape!

Prior to working with Lucky Paws, Dawn worked as a vet tech for many years working along side Dr. Strobel at Gardens Veterinary Hospital.

She has 2 grandkids who she spends as much time with as she can. “They are my world,” she says proudly.

Dawn adopted her two dogs from a former client who was unable to keep them. “They are fat and happy dogs.”

Her favorite part of working at Lucky Paws is that she is able to be a part of all aspects of the business.

HSN and QVC are her favorite pass times, second to her Grandkids. 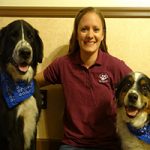 Whether playing with puppies or graduating therapy dogs, Krista says, “I have the best job!” She is a trainer at Lucky Paws who gets to help dogs exceed their potential. On her days off, she goes on adventures with her husband, two amazing sons, and two great dogs.

Heather has been the Hotel Manager for 4 years now. She started at Lucky Paws in 2010 as a part-time tech while in college for pre-vet.

Heather loves to spend my down time watching Turner Classic Network, and her favorite TV show is Murder She Wrote.

She grew up on a cattle farm, and still spends time working with her family there. 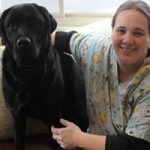 Michele has been working at Lucky Paws since 2011. There isn’t a part of Lucky Paws that she hasn’t worked in.

There are many dogs that Michele has watched grow from tiny puppies into sweet senior citizens.

She was happily given the opportunity in 2014 to begin her grooming career and has enjoyed having the one-on-one time with the pets, as well as the relationships that she does with the families.

Michele has 3 kids and a black Labrador, Reggie who mean everything to her. “I’m thankful every day for having a job that I love,” she says.

Kim has her degree in Veterinary Technology and worked with Dr. Lill for 9-years at Cranberry Veterinary Hospital until his retirement in 2013.

She has worked at Lucky Paws for 5 years, starting as a part time tech, and has been the Daycare Manager for a little over 2 years now.

Kim has 2 dogs. Foxy is her 13-year old black lab. She came to live with Kim straight from school, where she was one of the dogs she cared for during her training. Lago is Kim’s 7-year old, 3-legged Cane Corso. “He’s a cancer survivor and my best friend,” she says.

In her spare time, Kim loves to read books and watch sports. 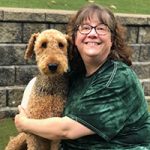 When Kirsten decided on a complete (!) career change, Lucky Paws was where she wanted to be.

Kirsten enjoys working with such different and unique people and their pets.

“One of the best things about my job is that if I’m having an off day, I can simply walk into the hotel and get all the hugs & kisses I need to feel better,” she says.

Kirsten is an avid reader and if she’s not spending time with her family or friends, she’s usually snuggled up reading a good book. 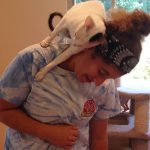 She now maintains our website and social media presence.

Even though Bri’s hours (and careers) have changed with time, she just can’t stay away from the pets – you will find her in the Hotel on weekends working and visiting with all of her old 4 legged friends, and making new ones!

“My favorite thing about working at Lucky Paws is seeing the happy tails wagging and the furry faces smiling at me. Sometimes I think we are the lucky ones!” she says. 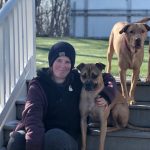 Kaitlyn has been at Lucky Paws since 2016.

“I am lucky enough to work in the hotel and daycare so I get to meet almost all of the dogs and cats in our care,” she says.

Her favorite part is spending time with the dogs and getting to see the grow from puppies to adults to seniors.

Kaitlyn has 2 dogs of her own – Simba and Molly. Molly loves coming to daycare with her! 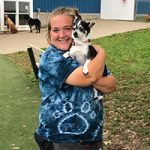 “Listening to how much my mom Michele enjoys working at Lucky Paws made me want to be a part of the team,” Jordyn says.

Jordyn started working part-time in November 2017, and is now working full-time as a Senior Tech.

One of her dogs is a rescue. When he came to live with me he was severely underweight, filled with fleas and not social at all. Since he’s been with me, he’s gained the weight he needed to gain, the fleas are gone, and he’s slowly making progress with his social skills. “I think we both rescued each other.” 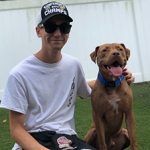 Caleb started working at Lucky Paws in 2018 after his mom saw an ad and thought he would be perfect for it. She was correct.

“I really love dogs, and I love discovering their different personalities,” Caleb says.

Caleb’s favorite past time (outside of spending time with dogs) is musical theater. “My favorite show is Anything Goes, but you can also never go wrong with Aladdin.” 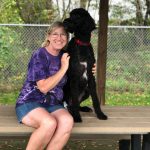 Sandy worked with Gretchen at the Western PA Humane Society for many years and came to Lucky Paws in 2015 to work in Daycare.

Sandy says, “I enjoy walking into the yard in the morning and watching the sun rise. But it is when my friends arrive with their eyes gleaming and tails wagging that makes me smile. And when their tails are still wagging at the end of the day, I know it has been a good day.” 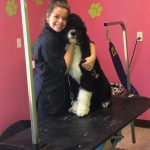 After high school, Ali went to grooming school. She earned her grooming license and has been grooming professionally since 2017.

In her free time, Ali loves to paint and spend time with her friends!

Dogs and smiles go hand and hand! . . Located near

One of our beautiful guests enjoying the pool! . .